Search for condos in Seacrest

Monterey Condominium is located in Seacrest. Built in 1999, this Italian-style complex has three buildings that each feature four floors and eight units a piece. This means there are 24 units total in the complex, each offering high end amenities for comfortable Florida living. The complex is situated on a scenic bluff near the Camp Creek Golf Club, and residents have excellent views of the Gulf of Mexico no matter which unit they own. 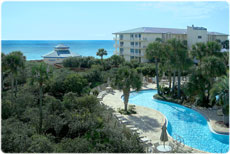 For those looking for a great living option on the south side of Highway 30A, High Pointe Resort Condominiums offer attractive living space right across from Seacrest Beach. With a total of 108 units spread across five four-story buildings, there are four floor plans to choose from with one that's sure to be perfect for any living situation.

The Villas at Sunset Beach are gulf front condos that are located across from Seacrest Beach. Residents of the 24 units at the Villas at Sunset Beach live off of Highway 30A on the south side directly on the Gulf of Mexico. The property offers two distinctly different floor plans: option A is a three bedroom, three bath unit, and option B features four bedrooms and three bathrooms.

The name translates to "at peace" in the Creole language, and that's how you'll feel the minute you enter this upscale, four-unit gated development. Ideally situated on the southeastern boundary of Seacrest Beach, this graceful group of airy three-story villas nestles right alongside the western edge of Rosemary Beach.